A month+ of The Archers

Just saw a report on Sky News, of a new movie, which has No actors (Just like TA).
No script (Just like TA) and no competent production.

The film is in fact 8.5 hours long and shows nothing but a flock of sheep in a field.
The people who made it say it is a guaranteed cure for insomnia.

Surely this is sure to be a success with TA fans too. It’s so similar.

The people who made it say it is a guaranteed cure for insomnia. 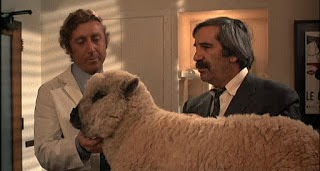 You can tell this is an old video from the SoC days. There is something about the scriptwriting that gives it away.

Are you feeling wooley? Peggy Woolley:grin:

It won’t be that similar, though: no continuity errors, for a start. Talented cast for a second. Plausible scripts for a third.

Ewww (not Ewe, please note) you horrible little poster. There is smut and then, despite the Fish’s views, there is just plain perversion.

I wasn’t thinking smut when I wrote it.Just a sheep related thing to make a smile:grinning:

Oh all right then. I’ll believe you. Just this once, mind.

Quite like the idea of a long film of sheep just sort of sheeping around.

Smut, I’m glad to say, is in the eye of the beholder.

If correctly viewed, everything is lewd.

If correctly viewed, everything is lewd.

Lurid, licentious and vile, there should be more of it…

A delightful young woman I worked with back in the late Cretaceous once announced “I can’t stand smut”; then, just as there was one of those ‘angel passing’ pauses, she elaborated "But I quite like downwight filth". It was made all the better by her inability to pronounce “R”, bless her. Her wedding was one of the most enjoyable I have ever attended.
And what that has to do with anything I have no idea… Dear X___, she was a complete sweetheart, and one always had to listen quite hard to what she said, because even if it was apparently quite a hackneyed or obvious thing, X___ had thought it out for herself - she very seldom absorbed/repeated received opinions; and sometimes when it sounded as if she was about to embark on something obvious, it turned out to be anything but and rather thought-provoking. She had had a rather strange upbringing and early life and seemed to rely very purely on her own estimation of things in a rather dauntless way.

She sounds a splendid person!

And! If it’s not correctly viewed, to be lewd. It just proves you should have gone to Specsavers