Lexi is SO polite

Not only does she tolerate everyone in Ambridge mispronouncing banitsa, she even does it herself, so as to avoid embarrassing them.

How long before the recipe appears on the blog, do you reckon? (Actually, I haven’t looked, so for all I know it might be there already.)

As far as I can determine it is not properly a puddingy thing at all but ought to be lovely with sharp sheep cheese, and is very much like a thing I learned to cook from a Cypriot, which with a few tweaks turns into Patsavouropita. Do not accept sweet versions. Savoury is what it should be. And although the Fish will baulk at this, ideally it contains dill. Can be done just with mint and rigani at a stretch, and is a Very Good Thing.
Doing it with apples is just a bastardised streudel without the Strudelling skill, imo. Pah.

Yes - every reference I’ve found suggests that the standard banitsa is a savoury breakfast thingy, filled with an egg and sheep’s cheese mixture. There is a sweet version, but it’s far from the norm.

Right you are joe. Let us stand shell to wing and fight for the authenticity of foreign pastry-based dishes! Up the bakers!

You can take our breakfast foods, but you cannot take our freedom! 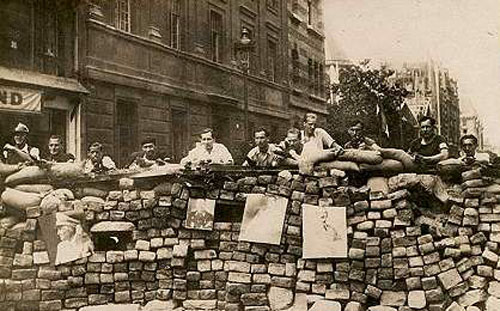 I found myself waiting for someone to pop up and tell us, disdainfully, that her Bulgarian neighbours make a banitza from a recipe of the wife’s grandmother’s which is an apple-based dessert dish…

So nice it didn’t happen.

It’s only a matter of time. This was a good one:

I think you’ll find it is banista and not banitza

I think you won’t…

Maybe we can get the Russians to take Bulgaria back… It’s got to be worth trying?

I’ll throw in an extra £20 to sweeten the pot, if the Russians will take Lexi and the rest of the TA cast, too.

But the Russians shall not have Constantinople*.

*possibly one of Lynda’s llamas? One loses track after a while.

`[quote=“Fanta, post:6, topic:630”]
I found myself waiting for someone to pop up and tell us, disdainfully, that her Bulgarian neighbours make a banitza from a recipe of the wife’s grandmother’s which is an apple-based dessert dish…
[/quote]

Can’t quite manage that, but I did find a site called Banitza.com, run by OnlyinBulgaria, which says:

"The banitsa is such an universal pastry dish that could also be made sweet. Sweet fillings use apples (similar to apple pie or strudel), pumpkin, plain sugar, walnuts, cinnamon etc. Again, the different types of fillings bring different names to the banitsa - the apple variant is called strudel (щрудел), the pumpkin variant is tikvenik (тиквеник), etc.

Another type of sweet banitsa is the milk banitsa. It is made by baking the leaves soaked in milk with sugar and vanilla."

In short, sweet apple banitsa is a thing, but you don’t call it “banitsa”. Or “banitza”.

I thought the z looked more knowitall and pseudy. You know, like the way that Jennifer talks about BooderPesht.

I’ve got friends who always call it Budapesht.

They are Hungarian though.

Oddly, the pastry website is called Banitza.com but it’s spelled “banitsa” throughout except for a remark that it can be spelled with a “z”.

I generally pronounce places more or less as the locals do - apart from anything else it’s much easier to ask my way! What’s the point of remembering “mosCOW”, “Mosco’”, “Moscou”, etc., when you can just say “MaskVA”?

I generally pronounce places more or less as the locals do

That only encourages them, Spadger. ‘Torino’, ‘Beijing’, ‘Mumbai’, I ask you - where will it all end? (Pyongyang, probably)

Most of the BBC, including people on the world service reporting from it, pronounces it Budapesht. It’s the Booder that’s a little, erm, idiosyncratic.

But the z was a particular reference, to a spelling of Alexandra which irritated me, which there is no reason you should know and for which I apologise

I go with what will make most sense to whomever I am talking to.

It is usually gratifying when people try to get Welsh placenames right, but it doesn’t always work.

I find the Tomtom setting where they pronounce the names of streets or destinations so annoying that I have turned it off.

In West Wales the Welsh placename usually comes before the English on street signs. So Tomtom uses the Welsh one. But nobody says they are going to Abertawe when they are speaking English, except as a joke. We go to Swansea.

It doesn’t help that they use English voices and they often get it wrong. Even if they get the sounds more or less OK they never get the emphasis on the right syllable (the penultimate one). So anyone Welsh is distracted by thinking “Where?” all the time, and trying to work out what spelling might have produced that sound. And though the rotten pronunciation might be more recognisable than the right one to other English people, it won’t be recognisable enough to make as much sense as just saying “Swansea”.

Of course, where there is only a Welsh place name, we all just have to try to understand each other. I sometimes have to get people to spell it to work out where they want. I don’t mind. I’m in their boots if I have to find somewhere Gaelic.

I had a robocall from my credit card company on Sunday in which it were trying to speak the names on some recent transactions. I can understand their system getting “Lumenaris” wrong (“lumen-airs”), and maybe even “Beaconsfield” (BEE-cons-field), but “railway” (r’l-eh)? Maybe it was trying for R’lyeh and couldn’t quite make it?

I can’t help feeling that life may have been less stressful for many people (maybe even a majority) before the decision to go back to Welsh after a longish break during which on the whole the Anglicisations had settled in (as in Swansea). Same for Cornwall only even more so: Cornish no longer existed and the last Cornish speaker had died, and it seems to me perverse to decide you have to start using a dead language, really.