At which point they hadn’t sold anything, so surely any sale would be a 100% increase? Otherwise they’re looking at an increase of 10% of 0…

That was what I thought.

But I am not a mathematician so I didn’t like to say it in case I was being stupid.

Nor am I, but isn’t something infinitely more than nothing?

Much as I hate to say so, it did make sense. ‘Sales of BF produce’ - presumably veg- have increased since the app was what I understood.

The latest period (week, day, whatever) before the launch vs the latest period before now. It’s a little sloppy, but since all but one of the possible interpretations is clearly nonsensical…

isn’t something infinitely more than nothing?

Depends how you define it. Tom’s 10% claim only makes sense if there’s a specific target for turnover; “We aim to sell 10 mg of Mankwold per week, and since launch we’ve sold 1”. But you’re right, an increase from zero is technically infinity (or rather, “undefined”) since it involves division by zero.

‘Sales of BF produce’ - presumably veg- have increased since the app was what I understood.

But I don’t think that was the claim. I thought Tom mentioned the Bridge Farm produce separately, as an afterthought (how else)? Could be wrong, of course; my eyes tend to glaze over when SLT MegaCorp plc drops his trousers and starts talking.

Drop two words and that describes everything about TA.

What Tom said was

“And I’d like to look over the most recent Bridge Fresh figures. Since the launch, turnover’s gone up almost ten per cent.”

Since the launch of Bridge Fresh (the name of the app) turnover (of something unspecified) has gone up a bit.

“I might ask Helen for the latest shop figures too. I know you were concerned adding meat and dairy to the box scheme might eat into sales, but if anything I reckon they’ve slightly improved.”

So the “almost ten per cent” is not sales in the shop.

So just the usual gibberish, then?

It does sound as if Tim Stimpson is as good at this stuff as I am, certainly.

I might have known. Does this mean he’s being put in charge of another ishoo SL as well?

Scriptwriter found with a keyboard stuffed down his throat?

At which point they hadn’t sold anything, so surely any sale would be a 100% increase? Otherwise they’re looking at an increase of 10% of 0

Mathematically an increase from zero has NO %'age value. A %'age is a relative figure & any number relative to 0 = no value.

Mathematically an increase from zero has NO %'age value

Agreed - that’s why I said it depends on how you define the terms. Working backwards, you could argue that the x mg of Mankwold sold since the launch is 100%, so that at the point of launch they had sold x -x = (100 - 100)% = 0. It doesn’t work the way Tom said it, though, unless, as I suggested, it’s relative to a projected figure. A tad complicated for Stimpleton, I suspect

I wonder who the SW was that had Kirsty’s life turning around 360°?

Scriptwriter found with a keyboard stuffed down his throat?

Why waste a blameless keyboard?

Mind you, we could use the remains of Jim’s. Not sure about the froat, though; a bit far to travel before reaching the thought centre.

stuffed down his throat

…Hmmmm, I was thinking of starting lower down, and from the other end, actually!

I don’t suppose most scripties use a proper keyboard.

It’s said of the IBM Model M that it’s the only keyboard that you can beat someone to death with, dig a shallow grave with, and still use afterwards to type out his note saying he’s going on a long holiday. 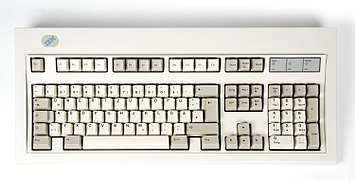 …I guessed it may have been! (…I wonder why?

)
Could it have been:

I think I’m starting to feel sorry for the poor bloody actors (…wiv the ekseption of those wot plays PoopSquit & FagAsh; oh, and mAdam, and TheLittleOirishChef!)