A Sparrow's Meanderings: a fantasy

There’s an old saying in sparrerdom: a free meal can get surprisingly expensive, so you might as well load up yer plate and glass while yer can.

For someone who claims to be in favour of wildlife, the Daft Old Bat is surprisingly protective of her honey samples. I’m life, aren’t I? And wild?

On Sunday meanwhile (nothing ever happens on a Saturday so I go down the Borchester Chippy and look starvin’) there was just lots of talk, and talk, and nobody ignoring their food at all. I dunno, some people have no sense of priorities.

Some people pay nearly a million quid for a bit of land and don’t provide any biscuits at the meeting. Mark my words, it’ll all end in knives and fire. Mmm, knives and fire…

Did we perchance meet at the Levington Ship, many moons ago? Remember one sparrer in particular who sat on the table beside my plate and gave me a Stare. Theft was beneath his dignity; hand-feeding was de rigueur.

Probably, but this is what I regularly have to deal with while trying to work; you try resisting. (At least, if you want any peace) 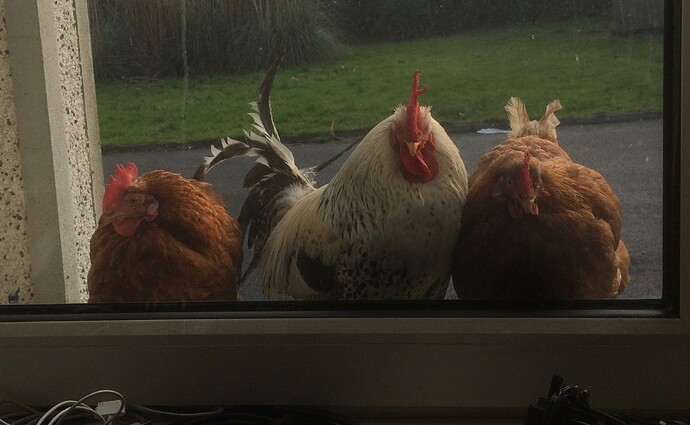 Oh, I wouldn’t begin to dream of resisting.
The sparrows at The New Inn on Tresco tend to get on the table and involved, too …

There was a hotel in Åland where they asked us please not to feed the birds at breakfast, because it encouraged them to get onto the tables and there had been Complaints.

Can’t remember whether I mentioned the new arrivals a few weeks ago - 3 bantams found abandoned. We brought them in, only to find they were all roosters. Take it from me, four roos is a pretty close approximation to WW3. Two escaped (at least - none of the tell-tale signs of an unfortunate end; none of these would give in without a struggle!). I think what happened was the third drove them off - he thought nothing squaring up to Soo, who’s about three times his size! He’s since been placed in protective custody - oh, and dubbed “Tyson”: 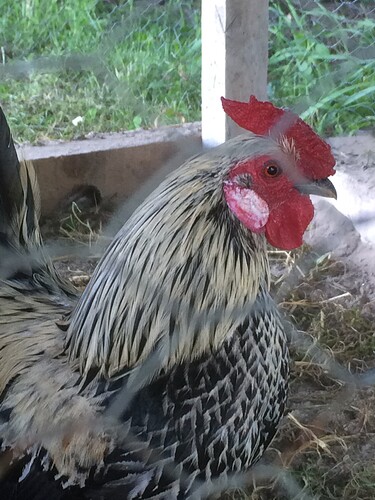 Advice from an experienced poultry keeper was to find him a GF (Tyson, not the poultryman) as it would calm him down if he didn’t think he was competing with Soo. Enter Miss Kiki… 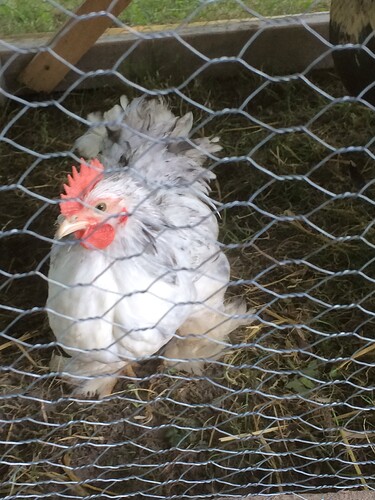 “Calmed down” doesn’t begin to cover it - he’s completely, well, henpecked! Kiki appears to be part silkie (note leg feathering - haven’t yet seen enough of the feet to count the toes) and as has been remarked, definitely wears the trousers (in all senses!)

Oh, she’s rather lovely, isn’t she?

Bet you never expected to become a procureur for poulty.

Oh, she’s rather lovely, isn’t she?

And knows it, too 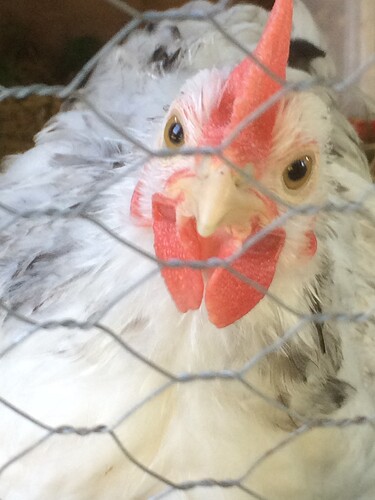 LadySusan and I are just admiring your poultry, Joe. I think Soo, Tyson and Kiki might have themselves a fan club!

Poor spadger; can’t compete against that sort of competition. They know their place, do sparrows…

(But I bet That Bird would nick their feed, and look innocent.)

Yes, I bet That Bird would, 'n all. When it comes to nimbleness, them sparrers is in a class of their own.

What makes you think they’re competing? Sparrers have their own unostentatious beauty; no need for frippery.

True, but they still Know Their Place.

You say that as if it could conceivably be lowly; don’t you believe it!

Organic wholemeal knit-your-own-sandals cafés. Plus point: they don’t chase you out, they say “oh wow man, I can see a bird on the cake stand, that’s heavy stuff”. Minus point: it’s all Healthy. Carrot-cake ‘n’ bean salad, pfeh.

“Ooh, let’s buy a place together. Then we can fail to get a plumber on a Sunday!”

If you’re getting free meals, they have a habit of stopping suddenly, so make chips while the sun shines.

Do sparrows actually like salads, I ask? Carrot? Beetroot?