A Sparrow's Meanderings: a fantasy

As a small and delicious hedge-dwelling bird I try to avoid being noticed, though you may have heard me on air occasionally. But I see things that never reach the microphones…

Went out for an evening forage today, and rich pickings at the Brookfield bins. A bottle of gin, well, all right, technically it’s gin, and I can at least set fire to something with it even if… let’s just say Hendrick’s doesn’t have anything to worry about, and neither does Aldi, and neither does Borchester Fine Spirits (Every Bottle Matured At Least 15 Minutes).

And a half-made casserole left on the windowsill. I’ll have that thank you very much. Seems nobody wanted it anyway.

Then over to the Hall to see if there were any party leavings. No booze, they’d drunk all that, but plenty of canapés that nobody was keeping an eye on. Seems they all thought someone had taken his share of the supper and gone off in a huff, while he thought they’d kept it. Speakin’ as a middle-sparrer, I applaud this lack of communication.

Back to me nest with a full tum.

Back to me nest with a full tum

First thing in the morning, someone had left some bacon and eggs and black pudding unguarded at the Dower House! A quick swoop in and a rapid peckity, and they were mine. No idea who was going to eat them but I don’t care.

Then over to Brookfield and a leftover lunch became mine. I don’t know why they asks for food if they’re not going to eat it. Wouldn’t catch a bird doing that.

Then back to the Hall for supper, and what’s this? Freshly cooked sossinges in the bin? Some people just don’t know when they’re well off!

Nothing but talk talk talk today, nobody sitting down for a nice meal in the open until they get driven off by the birdies. (Our name is Dunnock, for we are Many.)

But there must be something in the air since the poor blighter who’s going to end up doing all the work seems to be in favour of knocking down the perfectly good old building and putting up a new one, for the chicks to have their Petit Trianon fantasy of being respected cheesemakers. And where do the pigs come into all this, eh? That was the lad’s one actual skill, back when he had skills.

Meanwhile, people who go for long healthy runs rarely drop crumbs. Ah, “young” “love”. We sparrers have it easier. “Fancy a shag then darlin’” is the height of sophistication where I come from – I mean, you asked. Which is more than either of them will do this decade.

And over at Brookfield they slap a new coat of paint on an old drill and reckon that’ll make it sell. They’re probably right, that’s the shame of it.

You should go to Vilnius - the sparrers were virtually spherical. No idea why or how.

[quote=“HedgeSparrow, post:4, topic:437”]
“Fancy a shag then darlin’” is the height of sophistication where I come from
[/quote]Must be West Cumbria then !!

I and a friend got precisely that offer in a pub/hotel when we were doing some work there.

We politely declined (OK, OK … I know beauty is only skin deep, and it made me shallow but that skin must have been extremey deep !!!). On us thanking them but saying “no” their quick reply was " Oh… are you puffs ?". It was easier to simply shrug in a non-committal way.

Most birds are incapable of throwing up.

Sometimes this is a shame.

Spending time together on the day their baby was due, indeed.

And that nice generous fellow who always has a moment for the birdies, being taken to task by some twit who thinks he (the twit) has pinched his (the generous fellow’s) floozie. That twit has no idea what he’s doing, apart from bleeding money to everyone with a slicer. Mr Made of Bread is playing him.

And while all that was happening, everyone was too busy to notice the Legion of Dunnocks borrowing a full milk-churn. They’ll get the churn back. From a suitable height.

Do babies turn up on their due date? None of ours did. One of them, the doctor asked us what day would be most inconvenient and we said “the other one’s birthday”, to which he replied, “I’ll put that in my diary, then.”

Most birds are incapable of throwing up.

Sometimes this is a shame.

Take heart, Hedgers; most birds can achieve excellent results from the other end of the alimentary tract… 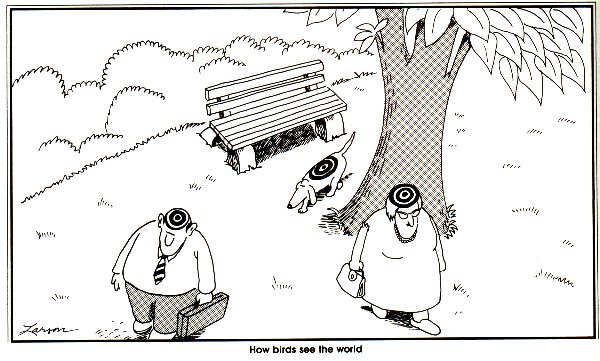 We are no mere Pigeons. We are Dunnocks. We know our place.

(Hollowing out a cake from the inside, for example.)

'Orrible sweltery day even in the microclimate, so I stayed in the shade: under eaves, mostly. A pleasing cricket match, with no science but plenty of enthusiasm, and the tea left unguarded for minutes at a time; that’s the way village cricket should be.

Still too hot yesterday, but the Daft Old Bat left her honeycombs unattended and probably hadn’t counted them anyway.

Generous With Breadcrumbs is up to something, judging by the way he’s giggling when nobody’s watching. I think he should grow a moustache and wear a black stovepipe hat. Meanwhile, an abandoned Pimm’s in the garden will do very nicely thank you.

All they ever throw out at Bridge Farm is the Mankwold. I’m not that hungry yet.

Ah, midsummer, and a young man in love (or at least lust) is not as attentive as he might be to his packet of sandwiches.

A grim day today. They were all dashing about, going back and forth and making offers and retracting offers and not talking to each other (give a quick tseep tseep as you go by, eh, it can save you thousands) and not dropping any food at all.

Did they in fact eat? There was a sort of aborted meal at one point, when Pat chucked Lilian out on the grounds that she was about to call everyone in; surely that was all left about like an unconsidered trifle when they went into row mode?

You don’t eat Bridge Farm Foods if you value your fevvers.

Yesterday the Lad was still not looking after his sammiches, but with less spring in his step. Oh well.

But you know what happens when a riot breaks out near a birthday party? Everyone abandons their cake to go and look.