For the bread makers among us…

Just back from Aldi. Now stocking rather interesting range of flours - picked up some 00 and Rye. Think it might just be a trial run, so I don’t know whether it’ll be available for long. Presumably if there’s a demonstrable demand…?

It’s something that crops up periodically. Both the 00 and the rye are good (I like a 4:1 rye/white loaf; didn’t make yer actual the bread with it, to be fair)
Thanks for the alert.

Nice to work out which mix/ratio of flours suit

Aldi & Lidl in Germany used to have a really good range of bread-mixes, which on the bread-mix setting of the machine took an hour. They had them in our Lidl for a while, but haven’t looked recently, as I gave The Senior Darlings the breadmaker

Haven’t tried the rye yet; might give it a go later. Seem to remember you said something about upping the liquid content? Will have a look in Hollywood’s book, anyway.

LadySusan says ‘great minds’, Joe, we were in Aldi yesterday and she bought rye and spelt. She says if she’d seen the 00 she’d have got that too!

Oh, another message to relay. Burbers sends you her best, I was just chatting to her.

Excellent news - do return the compliment! Lost her email in a disastrous drive failure - along with several years’ work. Think mine changed in the interim, so feel free to pass on the current one (as used on Naughty Step). Would love to get in touch again.

Sommetimes being on here is a little like being the new kid at school where everyone else has been around for years.

Sorry, Armers, LadySusan is my sister, she posts here occasionally and also makes bread. I am staying with her at the moment.

Burbers used to post on the old BBC board, but not on Peet’s so you may not have come across her. Her handle was ‘The Devil Wears Burberry’. We became messageboard friends and now are real life friends.

Somewhere out there there’s one with your name on it…

Haa. I double dare you.

I have no idea what I have wondered into. I also spent ten minutes earlier reading about, and getting surprisingly involved with, chickens. Literally expect Gus to reply “one of us, one of us”…

One of us indeed (oh Gus, do cluck off)

I also spent ten minutes earlier reading about, and getting surprisingly involved with, chickens 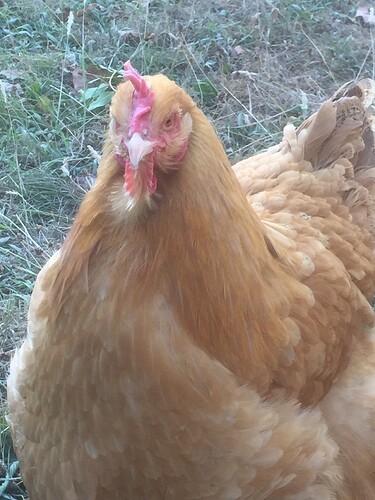 My mother kept fancy chickens for a while. It got a bit controversial after a fox stole one of the hens and the rooster proceeded to turn feral and attack her. He literally flew at her and scratched her arms and face to pieces! After the fox took the rest of the hens the rooster was rehomed and we have been cat people since. Quite a lot of drama for Surrey.

Aaash. Depends on what part of Surrey Kara.

Yes, they can get a bit over-protective in those circs. We lost one of ours to a dog attack. Jules (pictured above!) was also injured and was on antibiotics for a fortnight. The
(otherwise perfectly placid) roo had to be penned up while we dosed her - he thought it was another attack. Didn’t expect it the first time, and we have the tetanus jabs to prove it! He’s grand now, though.

Just got some new yeast delivered. Not sure I’m quite the target user…

That said, once you do the maths the results are excellent

once you do the maths