That Fish asked, and I got interested. It seems that there is no list of current YOIs in the UK - www.justice.gov.uk’s prison finder doesn’t categorise them (though it claims to), and the list on Wikipedia is incomplete and includes some that have closed down.

So here is a list that I made by combining those and lots of looking up. It explicitly excludes those that only take unconvicted prisoners, and those serving sentences of more than four years. Facilities for women are designated with (W).

The links are to OpenStreetMap, and should generate the fastest route from Inkberrow (the canonical location for Ambridge) to the prison in question. Not all of them will work; it’s a bit of a blunt instrument. Distances are straight-line distances from Inkberrow, in miles.

Also, here is a Map. YOIs are shown in blue text; the red circles are at 150 and 200 miles straight-line distance from Inkberrow. (Click on the map for a larger version, and in this browser at least click again for the full-sized one.) 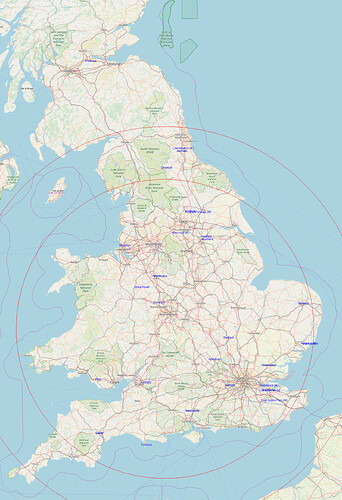 Well there’s a Thing! Thank you.

4 hours 20 minutes? Is Dopey bringing her on the tractor?

Two hundred miles in four hours twenty minutes must be a mistake on the part of one or other scriptwriter, surely?

Traffic on the bypass, joe

Anyone else reckon that Widderbeth will manage to have a crash while being both Tragic and Tired?

Yes indeed. A Sparrer, as I have remarked before, of Resource and Sagacity.

Anyone else reckon that Widderbeth will manage to have a crash while being both Tragic and Tired?

At that speed the only way she’d die on the journey is from old age.

I think at one point it was mentioned that it was a four hour round trip to visit, but then it became four hours and twenty minutes to get there. So, either they did take the tractor/quad bike, or went through central London just for the fun of it.

Kenton said that it was a four-hundred mile round trip; at that point the time taken had not been mentioned. On a different occasion Elizabeth that the satnav showed four hours and twenty minutes for the trip. It does actually work if the place they were going is Deerbolt – which incidentally also has them passing very close to Leeds, so it fits with the idea of Lily meeting Elizabeth there.

It wouldn’t add much distance to take the M1 past Leeds rather than the A1 a bit further away – though that would mean committing to the M1 round Sheffield too, which is usually a bugger. If I were doing that I’d be tempted to come straight back out on the M1 to get back to the A1.

Kenton said that it was a four-hundred mile round trip

Ah, that’s what I heard then. Thanks! I do like that more research has probably been done here than by the writers!

If going to Deerbolt (Barnard’s Castle) the best route is certainly not getting entangled in the roads of Leeds. Go up the M6. Once past Preston it’s a very quiet trip, up there & across the A66 and you’ll save an hour & a lot of stress.

Added to which you go past Manchester & could arrange to meet Lily (& Russ, natch) there or easily in towns nearby.

I would agree, but clearly David and Elizabeth, who have left the enclave but rarely this century and then only to the nearest airport, would take the route offered by the navi, which is the A1(M) one. I doubt that either of them possesses a road-map of the country.