A trivial thing, but it provides confirmation, supposing such were needed, that all things continue to operate subject to Sod’s Law.

It is the Ma’s birthday this week. Now, I tend to buy cards I like or that I know a particular recipient will like when I see them, not when a birthday or whatever is looming. As a result I usually have a handful of cards kicking around. Yesterday, I ‘dunged out the dining room’, which entailed moving a pile of post and a clutch of cards from the table. I propped up the cards, in their pristine, slippy plastic packets on top of the little built-in wall cupboard which is not much use for anything except CDs. There is a minute gap between the back of the cupboard and the wall of the room, although it is firmly fixed at the edges. So guess which card alerted me to this interesting fact by slithering irretrievably down the gap*? Yes. The one intended for my mother. None of the others that I have will do nearly as well, the other Ma-type offering having been pressed into service for Mother’s Day/Mothering Sunday.

*years ago I was working with a fearsomely bright but somewhat - idiosyncratic would be the kind way of putting it - systems engineer. The aftermath of a cold left him with ears that would gurgle, whistle and pop (to him - I couldn’t hear it, that would have been very strange). Towards the end of a difficult day, he stopped mid-sentence, stuck a finger in his ear, opened his eyes very wide indeed and confided “It just said ‘Mind The Gap’!” No further useful work was done that afternoon.

Sod’s Law is also known, in some circles, as the Second Law of Finagle.

The Second Law of Finagle asserts that anything which can go wrong, will go wrong, just to fuck you up.

The Third Law of Finagle asserts that when you have allowed for every conceivable fuck-up, nothing will go wrong, just to fuck you up.

The First law of Finagle got lost in the post.

A similar gap came into the plot of ‘The Tiger in the Smoke’, if I recall correctly. The journalist hid an important letter there. On purpose.

(Funnily, most people leave out the first ‘The’ when referring to that book. I think that must be because it does sound better that way, I think, anyway.)

Also: anything which cannot go wrong, will also go wrong.

I think it may be because the 1956 film of the book was called just Tiger in the Smoke and missed “the” off the front, JJ. People who heard of that or saw it might well think it was the right title for the book as well.

Do you know, I didn’t even know there was a film! My Mum and I were tremendous Allingham fans and we’ve always wrongly called it ‘Tiger in the Smoke’.

And let’s not forget the Darwinian variant:

When confronted by a foolproof system, Nature produces a new type of fool.

Tiger in the Smoke doesn’t have Campion in it, JJ. Otherwise it is fairly true to the original in some respects, though I don’t remember the Canon having the importance in it that he had in the book.

Lovely Sam - yes, he did, didn’t he. But the whatchamacallit was easily removed with a screwdriver, iirc. Which is not the case with this little cupboard.
I found another card which I think she will like as much or possibly better this afternoon, so have ceased to be quite so peeved.

I don’t agree that ‘Tiger in the Smoke’ sounds better without its initial article, I don’t think. I too had no idea there was a film.

When confronted by a foolproof system, Nature produces a new type of fool.

‘What could possibly go wrong?’ is a very good mantra for muttering under the breath when a Shiny New Highly Senior Manager comes and has ideas at one and one’s functional and carefully assembled little team of reprobates. It goes a bit, well, audible when muttered by all eight of you in unison, though…

I taught my little chickens well

I taught my little chickens well 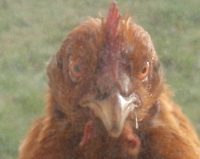 (Now that one fits the “concentrated evil” stereotype!)