Was there any evidence at all

that Brian was speeding when he hit the cat?

He didn’t deny it, though you could put that down to not wanting to get into an argument and he admitted that he was not paying full attention. It’s easy to let the speed creep up in you are not paying attention and on very familiar ground. At least that’s true of some people. In my case, I’m more likely to let the speed drop, I think.

Interesting that he confessed to Peggy but not to Lynda. Keep it in the family! Of course, Peggy was a lot less upset with him than Lynda would have been, I have a feeling. No talk of horsewhips this time!

I mean, why is it being assumed that he was doing more than thirty miles an hour when he hit the cat? It would have been damaged just as badly at a lower speed, I would have thought. And if he wasn’t speeding, I can’t see that Lynda’s speeding thing would have anything to do with it.

Unless he was also speeding through the village, there really isn’t much time for his speed to have “crept up” in the three hundred yards or so between the green and The Lodge, is all. And if he habitually speeds in the village I would have thought that Lynda would have noticed it by now.

Yes, I suppose in that case, speed must have had little to do with the accident. It he’d been going fast, he’d have killed Bill outright, which would have been better, come to think of it.

Perhaps he hasn’t really thought it through; he feels to blame because he didn’t stop and check what he had hit as, he admits, he was not paying much attention, worrying about having to make that presentation. So it’s all Justin’s fault, then!

So it is. I suppose Lilian’s too…

You mark my words, The Truth Will Out!

She had a cat-chute to drop the thing into the road in front of Brian?

Yup, though (of course) you can buy Special Cat Tunnels: 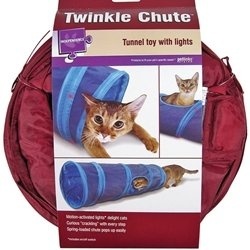 Heavy duty paper sacks, such as potato sacks, seem likely to be much more fun than that. They crinkle when a cat bashes them, and I bet that “Twinkle Chute” doesn’t crinkle.

What’s wrong with a cardboard box?

Thought for minute you were talking a cardboard box in the context of burying poor Bill, Joe. But yes, cats seem to prefer real things to toys. Just like children. Our last cat delighted in knocking the computer mouse off the table where it would come apart into three very interesting pieces, one of which was the battery which was a toy in itself.

There is nothing wrong with a cardboard box, but if you happen to have an old potato sack and the cat goes into it, that can be a lot more fun than a cardboard box for the observer, since the bag then starts to leap about the room as the cat pounces on it from inside when it crinkles, and it crinkles when it moves.

My son’s favourite toys, when he had just started to crawl and sit up, were the saucepans, saucepan lids and a wooden spoon to bash them with. We used to leave the kitchen cupboard in which those lived un-childproofed because they gave him so much pleasure for such a long time at a time, and we could get on with other things apart from cooking, which was pretty-much impossible when he had filled the kitchen floor with saucepans and was making his way from one to another bashing them and shouting happily about the results.

Ha! We did the same with the pots and pans. Far better than toys.

For cats, the large North American brown paper grocery bag - you know, the one that in movies always has a baguette sticking out if it, is similar in effect to your potato sack, though a bit more rigid.

If you see a cat and a hole in the ground, tread very carefully. The cats that led a semi-feral existence at my school added an extra frisson to high jump, landing as we did in soft sand.

Reading University had the same problem, and used to rake very thoroughly before they used the huge cat-litter trays for high jump and long jump.

How high the splatttttt went up the walls?

Grandson was exactly the same, FantaFish

Granddaughter used to stagger into the kitchen asking for meat