Discovered some dried fruit in its ‘worse after’ period lurking in the recesses and thought ‘Aha! Barmbrack’ (as you do). While waiting for the tea to steep it in to achieve optimal stewedness, I bumbled about on the internet and found a recipe that incorporates glace cherries. Not only that but has them in soaking with the rest of the fruit. That is deeply weird and very, very Wrong.

Glace cherries are Just Wrong, in my book, Gus

An Maraschino or 10 has possibilities though…

I simply don’t like the taste or texture of glacé cherries at all.

I think the not liking cherry flavour comes from artificial cherry being used to try to cover up the taste of penicillin in the medicine I used to be given for tonsillitis as a child, but the texture being wrong is their very own nastiness.

Butter will occur when it has had a chance to mature. Not before Saturday. Can you sustain yourself on maraschinos until then?

Glace cherries in a proper cherry cake are a fine thing. Or so they struck me when last I had one of those, which is a very long time ago.

I love cherry flavour,as in black cherries, or the morello type, but then we got the vile strawberry-flavoured medicine when we were children…

Actually, I like fruit as fruit, & not as/in much else

Gus, I’ll swirl the maraschinos in Vodka, until the barmbrack has sufficiently matured

And what self-control! No way could I keep swirling anything in vodka for four minutes, let alone four days.

Anyway, my arm would get tired.

I am Fully Trained, I’ll have you know…

I now have to get the dictionaries and cook books out to understand what on Earth some of this stuff is.

However, to shock everyone here, I can’t abide alcohol laden food. Not even a sherry trifle. The odd glug of red in a sauce I get but otherwise yuck.

I don’t mind it but it doesn’t do much for me - I’d rather eat the food and drink the booze. (Though wine in gravy is a great good thing.)

If barmbrack (báirín breac) is puzzling you, you might know it as teabread or bara brith, Armers. It can, some say ‘should’ have whiskey in. Mine doesn’t. No whiskey and, I feel, a waste of the good stuff: I only like the kind with an ‘e’ in, you see.
Regarding cherries, yer on yer own. But does anyone know what happened to angelica? Haven’t seen any for decades. I used to like that, rather. Apparently snaffling it unauthorised from the kitchen cupboard is Stealing with a capital Steal. I maintain it was purely foraging, but my backside will tell you otherwise.

Fret not Gus, you could grow some of this most unattractive of plants and make your own. OTOH you may think life’s too short

But I wouldn’t want it in industrial quantities. Nor, to be frank, the faffing. Plus, no matter how tough the plant is, I bet you it would go down with some mysterious blight - I have black thumbs.

Funnily enough, the first piece I found about it online starts with a TA reference Am I the last person on earth to use angelica?

Finding this crucial ingredient of my Christmas cake is like mission impossible.

…but it would appear, looking further, that Waitrose does sell it. Not that I shop there. As, rather more usefully, do a few online suppliers.

Aaah. Thanks. Bara Brith I do know of course. A sort of Soreen for people with stove hats & daffodils. Can’t abide it.

Then again I don’t like Christmas Cake or any of those heavy, dark fruit cake events. I do like Chorley Cakes, (far more than Eccles) & am a sucker for a Garribaldi.

Candied fruit, of ANY sort, is the Devil’s work and should be discouraged unless you took Communion on 9 consecutive First Fridays … & even then it’s inadvisable.

… so Angelica, despite Mrs. Shank’s growing the plant with a view to preserving it is a mere Rug-Rat in my eyes.

Soreen? I beg your pardon? There is no resemblance other than shape. My barmbrack is edible, for a start.

I have never had a Chorley cake. A new, small ambition there. Garibaldis - used to love them, wouldn’t give you thank-you for them these days.

Oh, and you are plain wrong about candied fruit. So very there.

When I was a child, in Chesterfield, Derbyshire , the word ‘Barm’ was used to mean anything containing yeast , so 'Barm Bread/Barm Loaf was made/bought

Chorley cakes. Available from lots of Tesco’s/Sainsbury’s etc. … inn the Norff at least.

Chorley Cakes - the not so well known cousin of the Eccles Cake but equally delicious. A tasty introduction in learning how to make pastry. 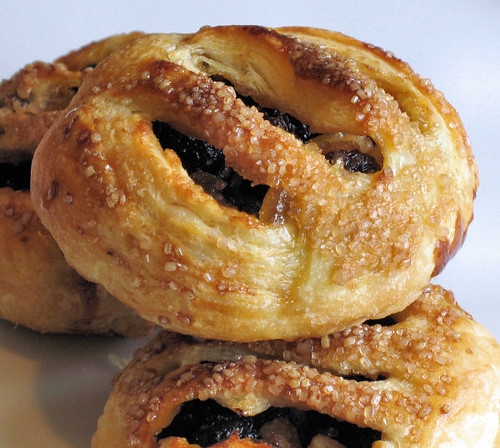 Eccles Cake - not up to much Chorley Cake. Up to much.

Mind you, don’t get me started on the mis-use of the term “barm cake” for a bread roll. That’s’ another story altogether.