I’ve read tonight that someone has predicted WW3 to start in May and last till October. And I have to admit I’m s*** scared. Apparently he predicted Trump becoming President and attacking Syria. Am I being ridiculous?

Probably.
Would take your mind off the e!ection, though.

No, the election will take my mind off WW3!!

I think probably the best way to look at this is the one my mother suggested when I was afraid during the cold war: “Since there is absolutely nothing I can do about it, I don’t let myself think about it too much.”

This is harder to manage than she seemed to find it, but it is a lot better than lying awake at night feeling upset about something which is completely outwith my ability to stop.

Thanks Fanta that’s good advice. It’s never been a thing I’ve worried about funnily enough but that just got to me tonight.

Oh, it’s a bitch when that happens! I hope that you manage to find other things to take your mind away from it, and sleep well.

My solution to this is to avoid most news (papers, TV, web sites). After all, their business model relies on you getting addicted.

I find I hear about things quite adequately from individuals, and I can then go and look up the stories if I really want to.

Thanks both. I shall try to push it to the back of my mind.

I hope it worked.

Would it help to know that Private Eye has been making fun of a WWIII meme more or less ever since Trump was elected? They certainly don’t seem to expect it to be taken too seriously.

They wouldn’t want a third World War though I’m sure!

Nobody in their right mind actually wants WWIII as far as I know; some very dodgy people seem to think they could hold it without any harm to themselves, which I find completely unsane, but mostly the RAF people I have known have not been certifiable. Mostly…

In a book I’m reading at the moment, our hero thinks his son might have joined up without telling him:

“Oh my God, is it the Crabs? It’s okay. Lots of blokes lead useful lives in the RAF. Did you think I’d object?”

But actually I was thinking more of Tom Lehrer:

Little Johnny Jones he was a US pilot
And no shrinking violet was he
He was mighty proud when World War III was declared
He wasn’t scared, no siree

And this is what he said on
his way to Armageddon…

When I was stationed at RAF Brüggen, USAF and Luftwaffe fighter pilots were barred for cowboy flying…

Well, there was that Incident a few years back.

See, the RAF does a lot of training over Wales, and it’s a bit short of distinctive landmarks. One local had a farm out in the middle of nowhere, which had the only obvious buildings for miles around, and so the pilots got into the habit of using it as a navigation point.

The farmer got quite annoyed by low-level Tornadoes and Hawks and things at all hours of day and night, especially during lambing, so he painted his roof:

After the first few weeks during which every air crew had to take a look at it, this had the desired effect, though apparently visiting American pilots were heard to ask “What’s a biggle?”. 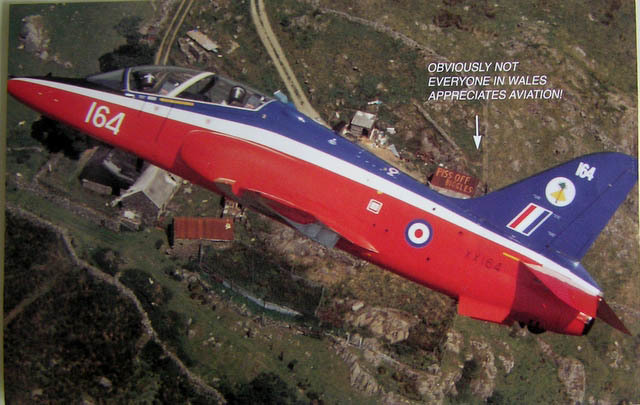 A biggle is of course a large boggle, and a boggle (according to the dictionary) can mean a bungle or botched job.

He’s just a silly buggle with a tin roof. Send in the Service’s finest buzzles I say!

Not true. The Americans were banned for taking their horses with them.