So, who wants to help ... to instaurate the cellar?

Morning, all.
I am sitting watching the Cormorants dive and feeling happy to ‘be away’. We’ve decided that we’ll just self-cater and are glad that we brought so much cooked stuff with us, although we plan to visit the Seafood Shack in Ullapool for a takeaway this afternoon. I am hoping that the scallops won’t be battered…
Soo xx

Better a battered scallop than an abused limpet. I mean, you just try abusing a limpet and see what happens…

“Tellingbone” and “electrickery” were both in use in my family before we had either a telephone (and then got a party line) or a television, back in the 1950s.

The book Catweazle was published in 1970 and the ITV television series also started in 1970, so the specific mangling of the words cannot have come from those; it seems more likely that Richard Carpenter used words which were already current for his television series and book.

I suppose ‘tellingbone’ made more sense in the '50s, since telephones were more or less bone shaped then.

Are you instructing me to abuse a limpet TFM?

Before we had one I thought it was the proper name for them, until I was carefully told different by my mother.

Not in the 'umour today, dere.

Can I do anything to cheer you up?

That Fish has just found the utterly foolproof way of stopping me stealing a banana.

Takes all the thrill out of it somehow…

I used to pinch Martyrs, when I was small

Obviously, a Very Long Time Ago

A Sparrer just don’t understand
The appeal of a legal banana:
Insipid and bland if it’s put in one’s hand
And duller than Silas Marner.
Pass proffered fruits: strike, Bird, the Contraband.

I love it Gus

I have goulash bubbling in the oven

How much rice do I need to feed all of ye

4oz dry weight per person - so how many of you want some?

I’ll not need much rice, as the sweet-cured herring, potato salad and other salad I had for lunch was quite sufficient - and very good. No chance of scallops, sadly, battered or otherwise. Lochinver beckons for tomorrow’s quest. 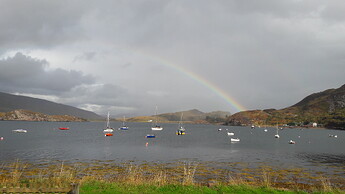 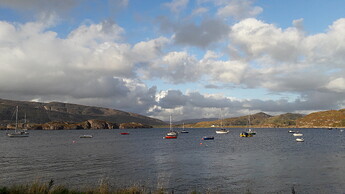 You could make the same mistake about a small tseepy bird. But I don’t think you would.

GS is in Bude & beginning his quarantine with copious amounts of ‘stripey cheese’ - the 5 Counties cheese he has loved all his life !

A gift to the terminally indecisive, that Five Counties hingmy.